Another Art Thing! Michael Stewart and Lisa Lang host a holiday yArt Sale at 83 Kenrick Street, Brighton, MA. Saturday Dec 1 from 1-5PM. We will have plenty of holiday gifty things.

Friday 11/16 Penny For Your Thoughts at Jacques Cabaret in Boston, 8PM.

Sunday 12/9 The People's Show at ImprovBoston in Cambridge, MA, 9PM

Friday 1/18/19 The Brown Notes headline at the Studio of Madness! Beverly, MA 8PM.

Friday 3/15/19 S&M Comedy at Jacques Cabaret in Boston, 7PM. I am told there will be drag queens.
Exciting new shows are happening. Jed's Basement closes mid August but do not fret, little bunny.

Friday 8/31 The Brown Notes headline the Studio of Madness in Beverly, MA! 8PM

Saturday 9/22 Token at ImprovBoston. Cambridge at 7PM
​
I have finally finished a huge (6x4 ft) commissioned painting of Las Vegas and I am now onto a huge painting of London for the same guy. Getting back into making smaller pieces more regularly has proven to be very satisfying.

Friday 3/9 The Gas, 7PM at Great Scott in Allston

Sunday 4/15 Featured story teller with Elderberries Improv, 7PM Cafe for Arts at the Armory in Somerville
​

Thursday, 12/21 SketchHaus at ImprovBoston, Cambridge, MA. Bath Barn and Beyond!

I have been selected by RAW Artists Boston to participate in their upcoming showcase on Thursday, October 19. It will be a fantastic evening with many local artists showing visual art, performance, fashion, music, and much more! The event is held 7-11PM at Mixx 360 in Malden, MA. Tickets are $22 pre-sale, $30 at the door. Please get your tickets soon! Link below.
https://www.rawartists.org/boston/savor
​ 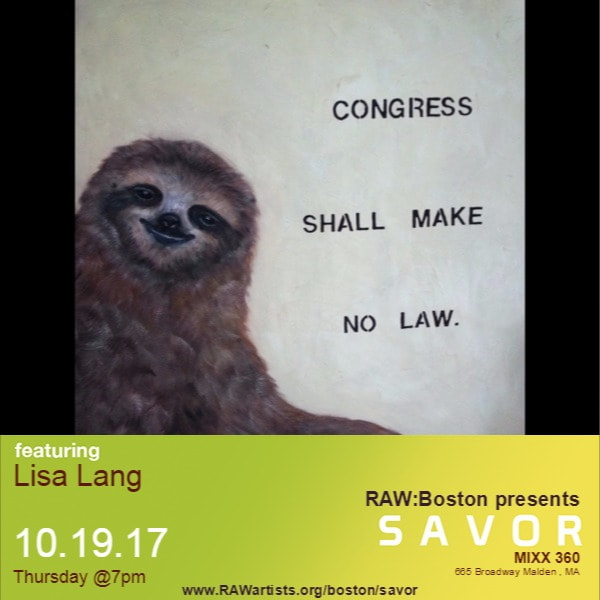 Saturday 10/21: Basementfest, 8PM in a basement in Allston MA. This is the first round of a competition.

Monday 10/23: Nick O'Connor Memorial Show at Koto in Salem, MA at 8:30PM. In honor of our friend Nick who killed himself last month, I'll be doing my character Karen the dinosaur. Donations go to Nick's mom.

Thursday 11/2: Duos at the Riot Theater 9PM Jamaica Plain, MA. I'm doing standup sharing the stage with my friend Carrie. I don't know how it is supposed to work!

Sunday 11/5: Laugh While You Can 7PM Armory in Somerville, MA. Standup variety show which donates to a different charity each month. This month donations go to Puerto Rico.

Saturday 11/11: at ImprovBoston in Cambridge, MA 11PM. A comedy show for insomniacs.

Monday 11/27: Story Club Boston at the Milky Way, Jamaica Plain, MA 6:30PM. This is a storytelling show and there's something different every time.

Thursday 12/7: The Naked Show at ImprovBoston in Cambridge, MA. 9PM.